What could possibly go wrong? They’re Germans! Never mind that they left Germany to join an entity that is avowedly at war with Germany. We can’t let such technicalities stand in the way of our moral superiority, now, can we? 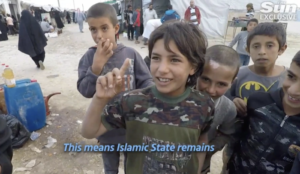 According to media reports, Germany has brought eight German women and children from Syria. In the past, they had joined the terrorist militia “Islamic State” (IS). Late on Wednesday evening, a plane with the women and their 23 children on board was expected at Frankfurt Airport.

According to “Bild,” they were brought from a Kurdish camp in northern Syria by a team from the German Foreign Office and the German Federal Criminal Police Office, with the support of the US Air Force.

The Foreign Office in Berlin initially did not want to confirm the reports on Wednesday evening. According to information from Deutsche Presse Agentur, a return campaign for women and children from Syria was planned for Wednesday. Some of the adults are likely to be brought before a judge upon arrival in Germany. According to “Spiegel,” six of the eight women have arrest warrants from the judicial authorities.

As the news magazine reported, the women, who are between the ages of 30 and 38, had spent years with their children in the al-Hol anti-terror prison camp in northern Syria, which was guarded by Kurdish fighters. As part of a humanitarian operation, they are now on their way back to their home country in a charter jet.

According to “Spiegel,” in addition to the women from Germany, there were also three suspected IS supporters from Denmark with their 14 children on board the machine. It is the largest repatriation of Germans from Syria so far, reported “Bild.” Because of the support from the US military, the action was treated particularly sensitively.

Austria brought back two children of the allegedly deceased Viennese IS supporter Sabina S. In that case, the grandparents had been given custody. The Austrian Foreign Ministry currently assumes that there are around a dozen people with Austrian citizenship in northeast Syria, around half of whom are children.

Norway: Muslim who murdered five posted video with words ‘I come with a warning…bear…