Deal with the causes of the terrorism itself, rather than continue to curtail the activities of daily life? Why, that would be “Islamophobic”! 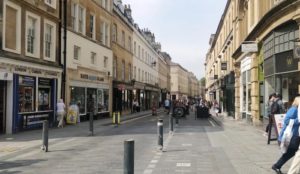 “How Bath’s anti-terrorism plans will limit car access to city centre,” ITV, September 24, 2021 (thanks to Henry):

A public consultation has been launched into proposals for new anti-terror measures in Bath, which would see roads around Bath Abbey closed to most vehicles.

These are intended to reduce the risk of a vehicle-based terror attack, such as a car mounting the curb – but the TRO would also stop most vehicles from accessing the city centre.

The proposals include vehicle access restrictions on streets defined as crowded places in and around Bath Abbey and the Roman Baths….