The ISIS jihadi in question didn’t seem concerned about being on Tinder. The idea that authorities might find him through that was apparently out of the question. He knew he could relax. 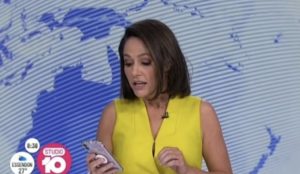 “And you thought your dating life was bad! Newsreader Natasha Exelby reveals she matched with an ISIS militant on Tinder,” by Monique Friedlander, Daily Mail Australia, October 7, 2021 (thanks to The Religion of Peace):

The affable journalist, 32, who went viral in 2017 after being caught daydreaming on-air, spoke candidly about her less-than-stellar love life on Thursday during an interview with 2Day Fm’s Morning Crew.

‘I was working in the Middle East, based on the Turkish-Syrian border a few years ago, so I went on Tinder – as you do, in-between war reporting,’ she said, sending radio hosts Erin Molan, David Hughes and Ed Kavalee into fits of laughter.

‘Anyway, I thought maybe I could [find] myself a saucy UN worker, or a diplomat or something. Turns out, I swiped right on an ISIS militant!’

The radio hosts erupted in another chorus of shocked laughter.

‘Well, he was very attractive!’ Natasha insisted, prompting Erin to interject: ‘Was that in his profile? Was that his job?’

‘No, of course it wasn’t in his profile,’ Natasha replied, adding: ‘But you know, we got to talking and one of the obvious questions is, ‘What do you do for a living?”

‘And then he told me what he did,’ she shrugged.

Natasha went on to explain that dating apps usually require users to provide a reason for why they want to ‘un-match’ with someone.