The Pandora Papers, King Abdullah, and Crooks On the Other Side of the Jordan 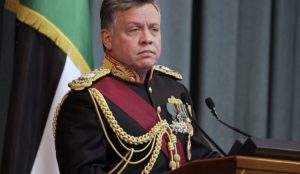 The Pandora Papers is the name given to a very detailed report, the result of a multiyear investigation by 600 journalists from 117 countries, about how many of the world’s very rich — politicians, celebrities, billionaires, drug dealers — manage to hide, for various reasons including tax avoidance, a total of $32 trillion. Among them one name has attracted special attention: King Abdullah of Jordan. A report on his successful — until now — attempt to conceal assets is here: “Jordan’s king hid over $100M in assets offshore, ‘Pandora Papers’ probe shows,” Israel Hayom, October 4, 2021:

The report released Sunday by the International Consortium of Investigative Journalists (ICIJ) involved 600 journalists from 150 media outlets in 117 countries sparked a political and social firestorm by shedding light on the previously hidden financial dealings of the world elite and how they have used offshore accounts to shield assets collectively worth trillions of dollars.

Dubbed the “Pandora Papers,” for the Greek mythology artifact the opening of which unleashed countless evils into the world, the leaked records name hundreds of world leaders, powerful politicians, billionaires, celebrities, religious leaders and drug dealers as having been hiding their investments in mansions, exclusive beachfront property, yachts and other assets for the past 25 years.

Many of the accounts were designed to evade taxes and conceal assets for other shady reasons, according to the report.

The ICIJ’s latest investigation dug into accounts registered in familiar offshore havens, including the British Virgin Islands, Seychelles, Hong Kong, and Belize. But some of the secret accounts were also scattered around in trusts set up in the US, including 81 in South Dakota and 37 in Florida.

Some of the initial findings released Sunday painted a sordid picture of the prominent people involved.

The documents show, for example, how King Abdullah of Jordan created a network of offshore companies and tax havens to amass a $100 million property empire from Malibu, California to Washington, and London.

The $100 million in real property that he bought through shell companies set up for that purpose does not exhaust King Abdullah’s wealth. How much more he may have in Swiss bank accounts, or in banks in other countries, is not mentioned in the Pandora Papers, but we can assume he has tens of millions of dollars hidden in this way, in addition to the real property in the U.S. and the U.K. that the Pandora Papers have revealed.

Data shows that advisers helped the monarch set up over 35 shell companies from 1995 to 2017, as well as helped him buy 14 homes worth over $106 million in the US and the UK. One was a $23 million California ocean-view property bought in 2017 through a British Virgin Islands company. The advisers were identified as an English accountant in Switzerland and lawyers in the British Virgin Islands.

There was no immediate comment from Jordan’s Royal Palace.

Of course the Royal Palace of the Hashemite King of Jordan has no comment. King Abdullah and his frantic advisers are stunned by the Pandora Papers revelations, and trying to come up with some face-saving response.. No doubt it will come down to the same lame excuse offered by Tony Blair, who also used an offshore company to avoid paying hundreds of thousands of pounds in taxes. Blair insisted that what he did “was not illegal.” “Not illegal” – perhaps. Immoral and disgusting – definitely.

The details are an embarrassing blow to Abdullah, 59, whose government was engulfed in scandal this year when his half brother, former Crown Prince Hamzah, accused the “ruling system” of corruption and incompetence. The king claimed he was the victim of a “malicious plot,” placed his half brother under house arrest and put two former close aides on trial.

It sounds as if his half-brother was on to something. How, if not through corruption, could King Abdullah have amassed such a fortune, of $106 million in real property, and other millions, or tens of millions of dollars, in bank accounts opened under other names?

UK attorneys for Abdullah said the king is not required to pay taxes under his country’s law and hasn’t misused public funds. They stressed that all the properties were bought with King Abdullah’s personal wealth, and it was common practice for high-profile individuals to buy properties via offshore companies for privacy and security reasons.

The King may have used his “personal wealth” to buy the properties, but where did that “personal wealth” come from in the first place? Does he take kickbacks from companies doing business with Jordan, such as defense contractors who thereby are assured of lucrative weapons sales to the kingdom? Does he receive a portion of foreign companies’ profits on the sale of fuel oil, or sneakers, or medicines? Does he have a monopoly on imported American cigarettes, the way that Mahmoud Abbas’ son Yasser does in the P.A.-run territories? The Pandora Papers journalists have promised more revelations; let’s hope the full scale of King Abdullah’s hidden wealth, and its sources, are laid bare.

“Any implication that there is something improper about ownership of property through companies in offshore jurisdictions is categorically denied,” said DLA Piper, the law firm that represents the monarch. “[Abdullah] has not at any point misused public monies or made any use whatsoever of the proceeds of aid or assistance intended for public use….

Of course such ownership of property through offshore companies is “improper” (even if not illegal), otherwise there would not be such enormous and costly efforts made to hide that practice, including the efforts by DLA Piper itself. Until we learn the sources of Abdullah’s wealth, we cannot be sure he hasn’t helped himself to aid money meant for the people of Jordan, or been taking a cut from companies doing business in, or awarded contracts by, the government of Jordan.

These are the real reasons for Abdullah’s hiding his wealth by buying expensive properties in the U.S. and the U.K. through shell companies. He doesn’t want his people, who are struggling economically, to be made aware of the size of his fortune, which they will understand could only have been acquired through corruption. And equally important, he doesn’t want Western donors to be aware of just how much wealth he has, lest this affect their willingness to pony up, year after year, so much money – with the U.S. alone now providing $1.5 billion a year.

Let us hope that in Congress someone will raise the issue of how much wealth King Abdullah has amassed and hidden, beginning with what the Pandora Papers have revealed so far, and whether, under the circumstances, American taxpayers ought to be funding such a grasping and corrupt ruler to the extent we are now doing.

The Pandora Papers revelation about King Abdullah brings immediately to mind a much more infuriating example of corruption in the same neighborhood. On the west bank of the Jordan, Mahmoud Abbas, the President-for-Life of the Palestinian Authority, now entering the seventeenth year of his four-year term, has with his two grasping sons Tarek and Yasser, managed to amass a family fortune of $400 million. How did he acquire such a sum? We know his sons have used his influence to further their business interests in the West Bank. Abbas’ son Yasser chairs Falcon Holding Group, a Palestinian conglomerate with tentacles throughout the Palestinian territories.

Falcon Electrical Mechanical has its hands in civil engineering contracts in everything from building sewers to paving roads.

And there is Falcon General Investment and Yasser’s extensive real estate holdings.

Yasser’s brother Tarek owns the biggest advertising firm in the PA, called Sky, with plenty of work funneled to it from Abbas’ officialdom.

This tight knot of profitable connections has made the fortunes of Mahmoud Abbas and his two sons. What would happen if ordinary Palestinians, who know Mahmoud Abbas is corrupt but do not yet know the full extent of his thievery and graft, were to learn the size of that family fortune? 80% of Palestinians now say they want Abbas to resign. Should the information about his $400-million nest egg come out, Abbas would be threatened with an open revolt, by violent protesters — already in an uproar over the murder of Abbas critic Nizar Banat — throughout the P.A. territories.

But Abbas’ fortune pales in comparison to what two Hamas leaders, Khaled Meshaal and Mousa Abu Marzouk, have managed to acquire. According to both American and Arab sources, each of these men has amassed a fortune of at least $2.5 billion — some say Meshaal’s fortune is “between $2.5 and $5 billion” — colossal sums that are scarcely believable. But these sums remain largely unknown to the Palestinian public. If the impoverished Palestinians in Gaza were to find out that $5 billion in aid money meant for them had been stolen by Meshaal and Marzouk, there would be a mass uprising in Gaza against the current Hamas leaders – the overall head, Ismail Haniyeh, and the Gaza chief, Yahya Sinwar. Demands would be made for heads to roll, unless and until those leaders, who have so far done nothing to claw back the sums stolen by Meshaal and Marzouk, at long last demand that they repay what they took. It is surprising that the names of Meshaal and Marzouk do not appear in the Pandora Papers; they surely deserve to be included in its investigations. Is it possible that the two former leaders of the terror group were deemed too dangerous to expose, because they might respond by unleashing attacks against the journalists who had been working on their stories and were coming close to exposing them?

The donor nations that continue to send aid money meant to ameliorate the living conditions of the Palestinians in Gaza and the West Bank, should take advantage of the Pandora Papers focus on financial malfeasance among the powerful, the rich, the well-connected, by insisting that until there is a return to the general Palestinian coffers of much of the aid money that Mahmoud Abbas in the P.A.-ruled territories, and Khaled Meshaal and Moussa abu Marzouk in Hamas-ruled Gaza, have managed to steal, no more aid to either Hamas or the P.A. will be forthcoming. Taxpayers in the Western world, once apprised of the amazing sums that these three “thieves of Palestine” have made off with, will insist. The Palestinians have received many billions of dollars, some of it skimmed off the top by their leaders, much of it spent on vast armories of weapons and terror tunnels, and what little is left may relieve, by just a nearly imperceptible bit, the worst off among the impoverished. There are many worthy recipients, woefully underserved, of Western foreign aid. As of now, the Palestinians are not among them.