Another drama has ensued between a landlord and tenant over the removal of installed properties by the tenant without the landlord’s consent.

According to the tweep, the tenant told his landlord before moving in to fix the electric cables and tile his apartment before but the landlord didn’t budge.

Thereafter, the tenant reportedly used his own money to furnish the rented house, as he tiled the apartment and fixed all the electric cables to his satisfaction since the landlord was adamant on not taking part of fixing the apartment.

Against this backdrop, the tenant, while moving out of the rented apartment to a new one, empowered his kids with a hammer and instructed them to damage the tiles so that he could pull out all the electric cables he installed before moving in.

In the words of Cyberomin, “A guy once told his landlord to tile his apartment and fix the electric cables before moving in, Landlord said No. Guy fixed it and landlord refused to share the bill.

“When he was moving out, he bought hammer for the kids around and they broke the tiles and pulled the cables.” 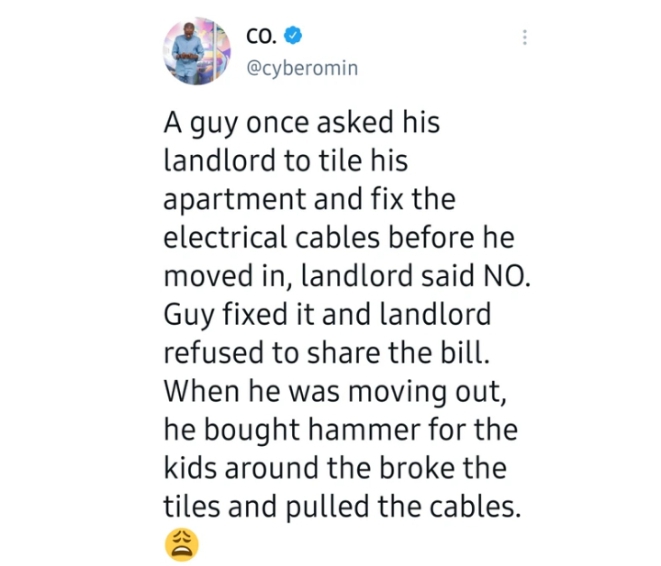 Tuface’s Baby Mama, Pero Dares Annie To Bring Evidence Of Tuface And Her Together As…

‘You Are Dealing With A Cartel Of Professional Blackmailers, So Please Be Careful’ –…