The calibre of dignitaries at the Balmoral Convention Centre, Victoria Island, Lagos venue of the launch of ‘The making of the Nigerian Flagship..A story of the Guardian’ on Thursday April 8th, authenticated the contributions of Late Guardian publisher, Alex Ibru to print journalism in Nigeria.

The Guardian pulled Nigeria’s top political and economic players to the venue.

The Vice President, Prof. Yemi Osinbajo in his speech at the epoch-making event said all notable Nigerian figures first established themselves through the media.

“This dynamic was orchestrated by civil rule. The nationalization of the daily time. Right from its first edition the Guardian carved a niche for itself ”

He recalled that while all other newspapers reported the death of Zik, “We reach out for the Guardian. It said Zik dead? Alive? Jubilation? A friend investigated the story and said Zik was not dead. ”

He said that The Guardian had congregation of professional who were eager to make a change. “Others later joined to form. Alex Ibru was a visionary investor who trust the thinkers.” He recalled that Alex Ibru was a man with foresight. “Which he truly exemplified in the formation of the Guardian. We need such partnership. The Guardian played important role for democracy. Alex Ibru narrowly survived an assassination attempt. For decades, the men and women of The Guardian have lived with conscience is an open wound only truth can heal it.”

Osinbajo also praised the efforts of the co -authors of the book: Aaron Okodie  and O’ Seun Ogunseitan

On why the book was written, Maiden Ibru wife of the late founding publisher of The Guardian said:” The place of Alex Ibru as one of the foremost makers of the Nigerian print media has not been properly documented. Thank God at last, here we are. The book is an idea, whose time has come. I know it’s the lord’s doing and it is marvelous in our eyes. We did not commission the book, it is an independent project by these two great thinkers”. 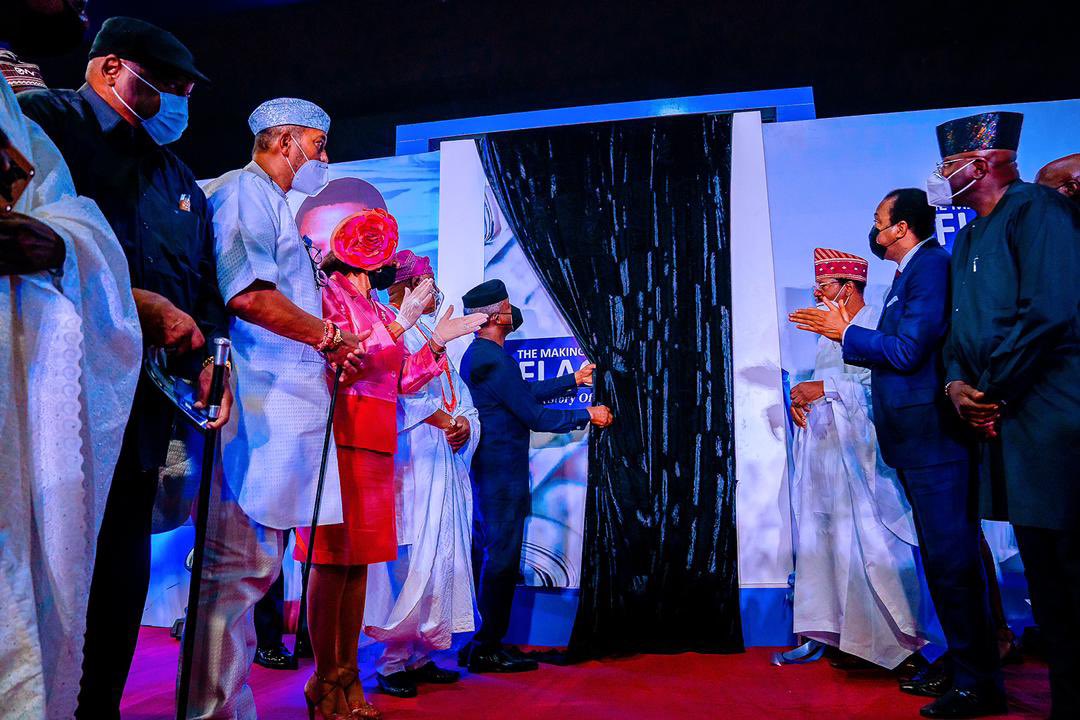 Former Governor of Ogun State, Chief Segun Osoba, who wrote the foreword to the book, and close a ally of the late Alex Ibru stated:”Alex Ibru never interfered with the professionals in The Guardian. Today I am happy that his family is here, his friends are here. I want to thank the two writers who find it fit to put this together. The unfortunate thing in Nigeria is that we don’t write.Jakande died, inspirer of my pressure on him for over thirty, forty years on him to write, he didn’t”.

Other dignitaries who also graced the event are Donald Duke former governor of Cross River State, Nduka Obaigbena, chairman of Thisday and Arise Television, Dr Patrick Cole, who was a pioneer director and now member of the Editorial Board and other notable Nigerians.

More from NationalMore posts in National »