In response to Jihad Watch’s recent articles about the suffering of Christians living under the Palestinian Authority’s thumb in Bethlehem, the birthplace of Jesus Christ, more information is flooding in that further exposes the Christians’ plight.

Moreen Botto contacted this writer regarding her husband Charlie Botto, who is behind bars in a Palestinian jail for signing her power of attorney for the management of his property in Jerusalem, as she is an Israeli resident.

The Palestinian Authority may justify the arrest on the pretext that the property may eventually go to Israeli businessmen, but an arrest such as this one becomes a powerful extortion tool while Charlie is held without any sort of arraignment. This Christian family today is being subjected to all sorts of extortion attempts.

People who live under the jurisdiction of the Palestinian Authority rely on their family members who are either permanent residents or citizens of Israel to take care of their properties inside Israel’s borders, also known as the “green line.”

As of October 2020, Charlie Botto has been in dire straits in a below-ground cell in what is known as Amer’s Prison, which is located near the Church of Nativity. This has been a cause of devastation for this Christian family.

Charlie Botto before and after his arrest

While Moreen Botto’s elder daughters Mona and Cynthia attend colleges in Hebron and in Jordan, her three younger children Joe, Tatiana, and Julian still attend schools in Bethlehem at a time when Moreen is desperately trying to provide for her family by running a modest business. Meanwhile, she is keeping herself fully abreast of any new development regarding her husband’s imprisonment.

Moreen’s ordeal continues as she reaches out to senior Palestinian officials to make them aware of Charlie’s arrest, despite the fact that he is not expected to be tried.

In her effort to be heard, she has been subjected to financial blackmail by members of Fatah, who keep assuring her they will inform Ramallah’s attorney general of her plight, but to no avail.

The tragedy of this Christian family has been ongoing for almost two decades. Farah Botto, Charlie’s father was killed in front of his house in Old Bethlehem by Fatah militants in May 2001, when he refused to keep paying protection money. 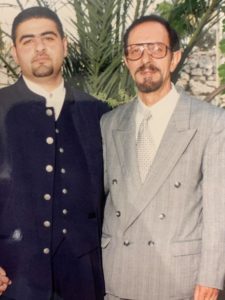 As the Intifadah began in October 2000, many Christian Palestinians suffered abuses and extortion attempts as Yasir Arafat turned to terror and violence in order to put pressure on the political process initiated after the Oslo Agreement, which was signed in Washington, DC in 1993.

A few months after her father-in-law’s assassination in old Bethlehem, Moreen Botto was drving near Bethlehem University when she witnessed Fatah militia members begin shooting at Farid Azizeh, a prominent Assyrian, and former Bethlehem council member. Azizeh lost his vision and had a damaged memory for the rest of his life due to wounds in his head caused by the bullets.

The Fatah militants decided to silence Azizeh, while the perpetrator of the hit-and-run incident was sent to live in another country so as not to cause friction with another Christian family that also had lost a son in the same accident.

One may question why Moreen Botto felt the need to contact this Jihad Watch writer, who in discussion with her was candid about the risks she was taking while Charlie was being held captive in a Palestinian prison.

While Mrs. Botto fears for her husband’s safety since he is held in an unheated cell during the winter while the Covid pandemic has severely affected the Bethlehem region, she has turned to Jihad Watch as a last resort to expose her tragic current situation.

Moreen Bottos’s attempt to send her husband Charlie adequate thermal clothing was recently turned away by the Palestinian jailers.

By bringing this matter to the attention of the public, Moreen Botto hopes her Israeli residency would mitigate the possibility of Palestinian retribution while hoping that Christian organizations in the United States will hear her family’s ongoing anguish.

On the other hand, in describing the deteriorating health conditions of Charlie Botto, his eldest daughter Mona Botto broke into tears while she explained that her father had been hospitalized three times thus far due to a stomach infection contracted while being initially detained at the Palestinian Preventive Security detention facility in Bethlehem. Moreover, she said that a periodontal disease that spread to her father’s mouth also resulted in his teeth being removed.

Moreen Botto and her children hope to make their plea through Jihad Watch also be heard at both the US Department of State and the US Congress, and by bringing this matter to their attention end this Christian family’s continuous agony.

Many years ago, another family member was forced to seek refuge in the UK after mentioning the assassination of Farah Botto by Fatah militants in 2001. This came in the context of her attempt to call attention to the plight of Palestinian Christians living under the Palestinian Authority’s jurisdiction.

As a result, her family had to endure serious reprisals by the Palestinian Authority, which drove her to openly challenge late Palestinian negotiator Saeb Erekat during one of his lectures at a London university.

Exacerbating the suffering of Christians in the Palestinian Territories is the fact that the Church does not speak out on their behalf, whereas the propagation of dhimmitude among the clergy has increased the burden on Christians in the land of Jesus.

Samir A. Zedan is a former Senior Counter-Terrorism Analyst at the US Department of State, and a former Development Outreach and Communication specialist at USAID/Iraq. He also was a journalist with major media outlets with assignments in the Palestinian Areas, Israel, Jordan, Iraq, and Europe.

More from WorldMore posts in World »