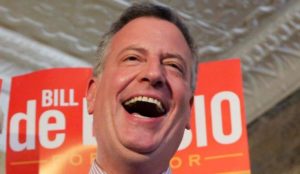 My latest in PJ Media is a VIP article. I am happy to be able to offer you a 5% discount on becoming a VIP member at PJ Media. Just enter the code SPENCER when you sign up here.

Could the Left’s authoritarian vaccine overreach herald the breakdown of its coalition? Chivona Newsome, who cofounded Black Lives Matter (BLM) Greater NY, gave an indication of this Sunday when she castigated New York City Mayor Bill de Blasio for his citywide vaccine rules, which she said were “racist.” Kevin Downey Jr. asked Thursday: “Will Black People Save the Nation From Vax Passport Mandates?” If Newsome has her way, the answer will be yes.

As Kevin noted, BLM held a protest Wednesday at Carmine’s, where three black women recently attacked an Asian hostess who asked to see proof of their vaccination status. At that protest, Newsome said: “Seventy-two percent of black people in this city from ages 18 to 44 are unvaccinated. So what is going to stop the Gestapo, I mean the NYPD, from rounding up black people, from snatching them off the train, off the bus?”

Who indeed? In the statement she issued on Sunday, Newsome doubled down and hit de Blasio for his hypocrisy: “Although Mayor Bill De Blasio ran on progressives values, nothing in his tenure will attest to his campaign promises. The September 13th vaccine mandate is racist and specifically targets Black New Yorkers. The vaccination passports are modern day Freedom Papers, which limit the free will of Black people.”

There is more. Read the rest here.